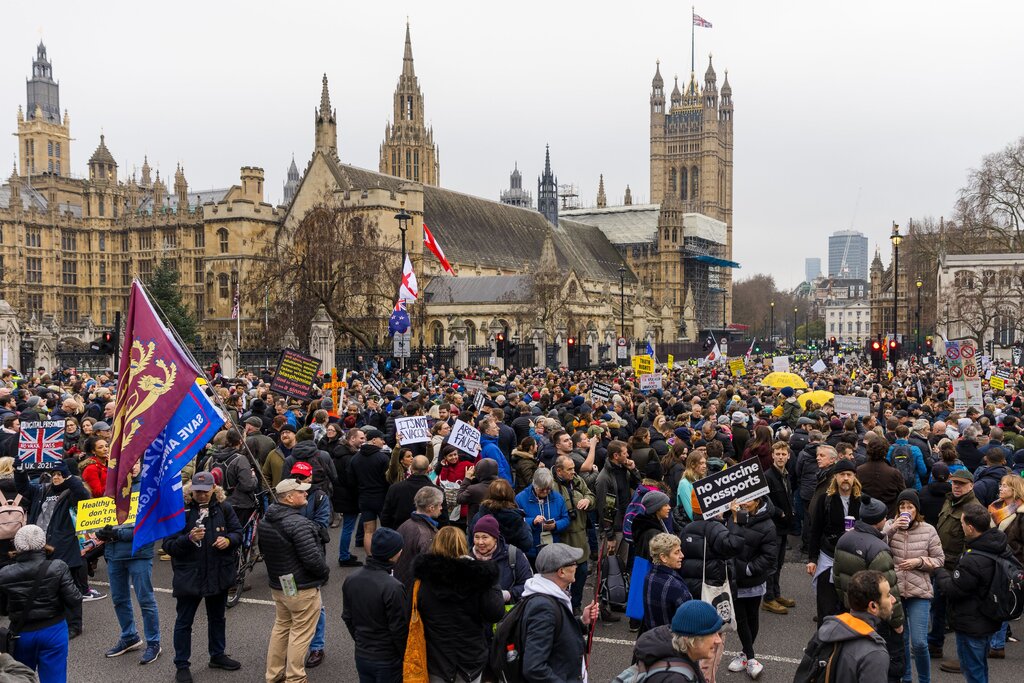 Demonstrators take part in a protest against COVID vaccination requirements and vaccine passports in London in December of 2021. (Vickie Flores / Shutterstock)
Op-Ed

In the Anglosphere, Freedom Isn’t Quite Dead

The acceptance of Covid restrictions was difficult to watch. But even Canadians are fighting back now.

Have the heirs of liberty forgotten their heritage? So it has seemed in the Anglosphere the past two years, especially in Commonwealth countries. From Canada and Australia to the U.K. and beyond, the government response to the Covid-19 pandemic has mostly devolved to heavy-handed mandates, unprecedented nanny statism, and incipient authoritarianism. Such policies are incompatible with the principles that built these societies and inappropriate for the descendants of those who gave the gift of ordered liberty to the world.

In Canada, a coalition of truckers is rallying against harsh vaccination mandates. The Freedom Convoy is filled with people who may be banned from their jobs because they haven’t complied with a sweeping and sudden government demand. The protest follows nearly two straight years of severe restrictions on daily life, from 10 p.m. curfews with $6,000 fines and total closings of theaters and gyms to restrictions on domestic as well as international travel. Canadian psychologist and author Jordan Peterson recently called on Prime Minister Justin Trudeau to “open the damn country back up” while lamenting that his homeland is “becoming increasingly authoritarian.”

Similar protests have emerged in New Zealand and Australia, where individual liberty has been even more curtailed. New Zealand’s policy of “zero Covid” has led to extreme lockdowns, including a 107-day blockade of its largest city, Auckland, which 1.4 million people were barred from leaving. When the lockdown lifted, only vaccinated people were given full freedom to travel. As for Australia, the former prison colony reverted to its beginnings, creating internment camps where people are held for weeks regardless of whether they actually have Covid. Liberty is in such sorry straits Down Under that Australian police are disrupting church services to check compliance with mask mandates.

Then there’s the U.K. The heart of the Commonwealth, home of the Magna Carta and the English Bill of Rights, ordered millions of businesses to close and fined people who dared to met their family and friends in the pandemic’s first year. Aggressive rules on masking and social distancing continued well into 2021. While media reports now mention that people are “legally allowed” to see friends and attend family funerals, such statements were once unnecessary and unthinkable, since these activities were assumed to be not only legal but incapable of being made illegal.

I saw much of this madness while organizing and running events in the U.K. last summer. I also saw cause for hope. Despite the slew of decrees handed down by Westminster, British citizens largely went about their lives. There was a widespread sense that while the government had the authority to issue such edicts, the people had no compulsion to abide by them. They viewed pandemic restrictions as a house of cards, capable of being toppled at any moment.

Which is exactly what happened. Not even the author of the lockdowns, Prime Minister Boris Johnson, could keep up the charade. His office did what everyone else was doing—holding parties, seeing friends, living life. Now the country has all but ended its pandemic restrictions and scrapped plans for vaccine passports. This sudden transformation surely springs from the widespread recognition that such absurd limits on liberty won’t be followed, from the top of society down to the bottom.

The same hope is now evident on the streets of Canada, in the form of truckers who’ve had enough. When Mr. Trudeau banned people from bringing fuel and other supplies to the truckers, many Canadians disobeyed and braved a police crackdown. For the Canadian people, famed for their niceness, this may be the greatest act of civil disobedience in history. Surely it is justified, given the stakes—which Mr. Trudeau has increased by asserting emergency powers similar to those used in wartime.

Let’s not forget the U.S., the largest country in the Anglosphere and the first founded on the promise of liberty for all. The wave of Covid restrictions, from school shutdowns to vaccine passports and masking mandates, has inspired mounting frustration and demonstrations. States that once led the way in constraining liberty are now rushing in the opposite direction. The Occupational Safety and Health Administration dropped its vaccination mandate after the Supreme Court blocked it, and the Biden administration is reconsidering other restrictions. The sudden reversal likely reflects politicians’ fear of a popular blowback at the polls in November.

Thank God ordinary people still have an extraordinary love of liberty and hatred of authoritarianism, even though so many of their leaders apparently don’t. They aren’t willing to give up the freedom that was so hard to achieve and is still too rare across the world. May they succeed in restoring liberty across the Anglosphere, where liberty was born.

Mr. Smith is president and CEO of the Common Sense Society.